Frozen Planet .. 1969- From the Center of a Parallel Universe (Peppar Shaker Records) 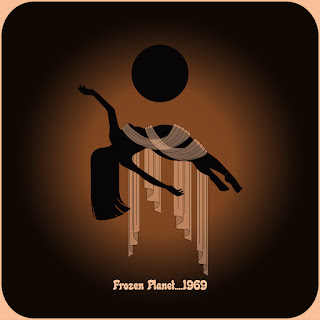 Frozen Planet 1969 are back with their 3rd release and 2nd this year. The band really is on a roll and this one sounds like it could have been recorded at the same session as the bands last record. I had this cranked up while sitting out on the patio staring out to the mountains and forest and was taken on a real journey. The bass sound is fantastic on the record and some amazing lines and grooves that give guitarist, Frank, a lot of space to do his thing and he does it!!
Signals is a short intro piece that leads into the Celestial Gambler. A bit of spacey guitar and then the bass fades up and straight into a fast groove with some killer guitar soloing. Later there is some slide guitar as well. Later it gets quite funky and the bass playing is killer. Wow..  Throough Hell’s Kaleidescope Pts 1&2, is a 13mins freakout. Starts with some really far out effected guitars and delays as the bass and drums just keeping driving the train.  Around 4mins Paul kicks into more traditional guitar soloing and less effected as the track comes down in speed.  Then there is a lot of freaky guitar and great bass by Lachian. It starts to pick up again around 9 mins. The Lady and the Archer is only 4mins and starts with a sort of Robin Trower like guitar. This is a way more traditional rock instrumental then the two previous freakouts! Ancient Wings Taking Flight is the last 14min track. It starts off quite slow and experimental and later becomes stoned and bluesy. Another pretty damn cool record. Released in Europe by Headspin.

https://peppershakerrecords.bandcamp.com/album/from-the-centre-of-a-parallel-universe
Posted by Scott aka. Dr. Space at 2:45 AM