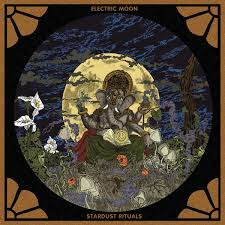 Electric Moon is back with a new studio album and what a great and different one it is.  I think they had reached the limit with where they could go with the heavy guitar freakout stuff. This album is great from start to finish and a real nice journey. More keyboard oriented and layered so difficult to perform live but EM has always just jammed live anyway.  The LP starts off with the 8min The Loop. A very organ based number and Lulu sings a spacey echoy vocal that reminds me a lot of the Growing Seeds, not just the vocal but the song actually. Stardust (The Picture) is a track the band recorded back in 2014 and has appeared on two live albums (instrumental) but Lulu sings on this one. IT has a heavy hypnotic simple bass and guitar to start and then Sula kicks in with the effects on the guitar and off you go into heavy psych space. Trippy vocals at times. Astral hitchhike is a short 4min track with sitar guitar. Beautiful and floating. (You Will) Live Forever Know is a long 22min track that starts slowly with some sitar guitar and a dreamy vocal. What a track… A really great album.  Congrats.

The album has been very successful with the first two presses (1500 total) already sold out and the 3rd pressing coming out in December. Get it!