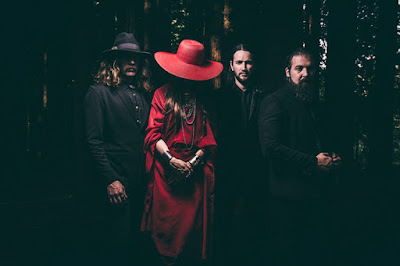 Devil Electric is a pretty new doom rock band from Melbourne, Australia.  They are a female lead four piece that has been around since 2015 and previously released one 7” record.  This album is pretty short, under 40mins and features 9 tracks.  The CD starts off with Monologue (where you once Wailed).  Pretty typical doom rock with an more open sound production. Pierina has a very good voice, similar to a lot of the great woman who seem to sing this genre these days. A very Candlemass like track. Shadowman has a cool guitar riff and is another mid paced track and very vocal oriented as there are few guitar solos (so far), despite the band having 2 guitar players. Lady Velvet, I just love the slow stoney groove on this one and some cool guitar parts.. I wish they had included the lyrics with the CD. Acidic Fire starts slow but really rocks out. Very passionate vocals and powerful. Monolith is a short instrumental track with a heavy bass line before the guitars kick in and it gets pretty psyched out but is over in a little over a minute. The Dove and the Serpent has very mysterious feel to it. Very cool track. Lilith is a slow and melodic yet mysterious instrumental track that leads into Hypnotica, the final track on the album.  This is real classic doom rock.  See the video below.  I have to admit the first few times I heard this CD, I was not that into it but the more I heard it, the better I liked it.  So don’t give up on this one. It grows on you!

http://bilocationrecords.com
Posted by Scott aka. Dr. Space at 2:44 AM