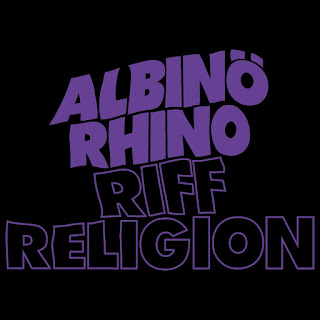 Albino Rhino have a really limited edition (100 copies), one sided 12” with two tracks out now. Just was released in June. I think there are still some copies left. Anyway, it features two tracks that were recorded during the Upholder record recording sessions.  Riff Religion starts with a heavy bass line before the hypnotic doomy groove kicks in. The vocal is quite powerful. It slowly gets more psychedelic and powerful as you get drawn in. Later Kimmo plays some pretty cool guitar when he lets loose. The double tracking is cool as well. What a great track. Killer stuff..

https://albinorhinodoom.bandcamp.com/
Posted by Scott aka. Dr. Space at 2:45 AM