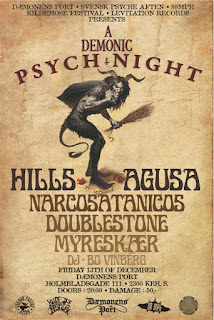 December 13th, 2013 there was a Swedish Psych Aften event with some Danish bands and Hills and Agusa from Sweden. It was a smoky night in Dæmonens Port, a short lived club just up the street from where I live and I recorded most of the bands that night. Anyway, my recording has ended up as a very cool double vinyl LP. The inside gatefold has the original poster. The album features the nearly the entire 70min show and starts off with a cool spaced out version of the Master Sleeps. Bring Me Sand (also from the Master Sleeps record), which has this folky melody on the guitar starts side 2 with some intense drumming and spacey drone synths to start but then it really starts to space out.  Frigörande Musik finished off the side, a track not on any of the bands records. Sanningens Silverflod and National Drone (a track on their latest album, Frid, released in 2015). Side 4 finishes off with a long version of Rise Again from the Master Sleeps. This is a record that you really have to crank up. It was just recorded with a pair of Audio Reality microphones but you really feel like you are in the room with the band, which is cool… Enjoy.. Limited to 500 copies on three different colours of vinyl..