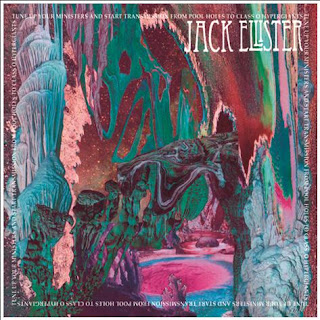 Jack is a very interesting psychedelic master from Holland. He has released quite a few tracks on Fruits de Mer but this is his first full length record and what a trip it is! The album has fantastic artwork and features 10 tracks, a few like The Man with the Biochopper, you may have heard before. Anyway, this track starts the record off and you are about to enter the world of Jack Ellister, where strange things happen and the musical instruments don’t always sound like you are used to.  A great track but all over the place with freaky sound production and a nice guitar solo.. The Sun sends me hails, features acoustic guitar and has a bit of a Beatles vibe to it until it devolves into a huge wall of sound.. Far out.. Saddle up the Horse – “I got a shotgun and a revolver and  I don’t know why but I like them both!” Great chorus! Calm Adapter starts off with a drone of sorts before some guitar kicks and vocals but only briefly and then back to the far out drone.. Strange track.. Ends side A…. Great Esmeralda begins side B, for another trip to another world with a really strange arrangement and trippy stuff happening and then just briefly back to the normal world. Wishmachine washes over you and is gone before you know and then we come back to reality with Old South, which is just Jack and his guitar.  Some other instruments later join him. Curator starts off in another universe, somewhere out there… The album ends with A Hunter needs a Gun, a your trip has ended..  Pretty damn cool stuff.. Fans of Reefus Moons will like Jack’s take on the world….


http://fruitsdemerrecords.com
Posted by Scott aka. Dr. Space at 8:41 AM