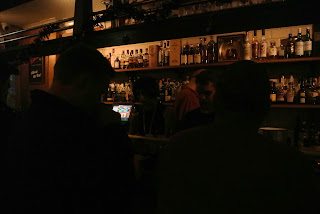 We were back at the Borderline for a 2nd night in a row, after seeing the Pink Fairies concert the night before. The ritual was similar this night as we went to the Craft Beer Company again and had the Neck Oil, a great pale ale and the Blueberry Phantom. All excellent beers. Wow.. What a great place and highly recommended. The staff were all dressed up in cool face paint and costumes and the beer was amazing!

Next we went to a gourmet pizza place called NY Fold and there they were playing quite bad music at very high volumes but the staff were a riot, all dressed up and dancing together when there was no customers to serve..  The party had already started!

Rusty GS has nearly finished by the time we got in the door. A lot less people tonight, the club being about half full, I guess. Rusty GS are a really young band with just guitar and drums. The obese drummer was really great and the singer-guitar player was a bit like Angus Young in his look and stage presence.  This was pretty simple high energy riff rock with no solos… they had a great energy and vibe but we only saw the last 2 ½ songs. 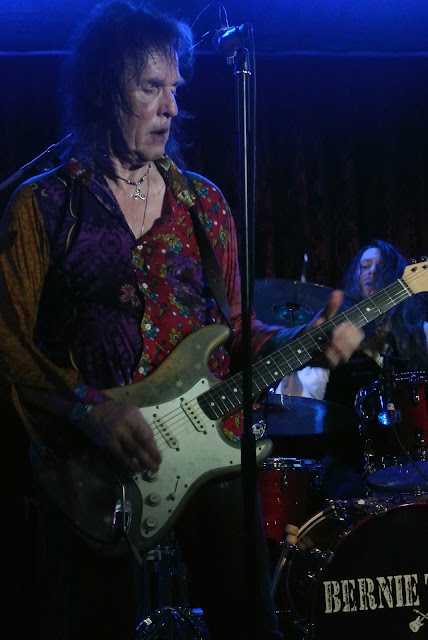 IT was only about 25 mins and Bernie hit the stage at 20:45 and opened up with Wild West from the Electric Gypsies album. He is a guitar player who I really liked in the early 80s, both with Gillan and his solo works. I just figured I would never see this guy play but here he was in a small club in London, when I was in town so I had to go..  He had a great guitar sound and started off a bit rusty but really was ripping it up later and a lot of the new songs were really good as well.  It is a new young band he has but they play great together and now they have made two records, Flowers and Dirt (2014) and Blackheart (2015). He mixed in a few his songs from the 80s like Star and Turn out the Lights between mostly new songs.  After the acoustic track (Pearls) and the drum solo, he played a couple of GMT songs (Rcoky Road and Can’t beat Rock and Roll). They ended the concet with  a few Gillan tracks (Trouble and New Orleans). The concert was pretty short and about one hour they went off for an encore and came back and started with No easy Way and this featured the special guest that was listed and this was a bit disappointing as it was a guy named Pete Cook who had donated a lot of money to help him make the last record so he got to come up and play with Bernie.  They had some fun and a good jam but Pete was more into looking cool than actually playing well.  He stayed on for a track called The Party’s over. Bernie played a really great solo on this one. The whole band hung out after the show and signed autographs and were super friendly… 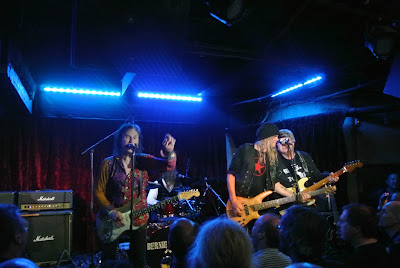