The Presolar Sands- Into the Dirt 7” (Lazy Octopus) 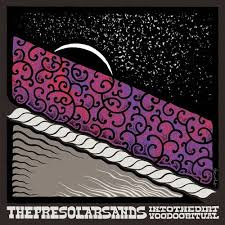 The Presolar Sands is young new Swedish psych shoegaze whatever you want to call it band. The band features two female vocalists on bass and guitar as well as lead guitar and drums, when they played live but there are 7 players on this record..  Into the Dirt starts the 7” (plays on 33rpm) with just some guitars (one stummed and the other noisy) and then a sort of stoney track slowly grows out of it and then the female vocals kick in. Jessica has a quite special voice. The guitar sections inbetween the melodic vocals are quite intense. It goes through several movements but keeps a pretty dense wall of psychedelic sound. Voodoo Ritual begins the B side and again starts with this strummed guitar before the more psychedelic guitar kicks in. The bass has a more thumping groove than on the previous song and a bit more dreamy vibe but Micke (or Robin) plays some intense guitar parts which are really mixed up front. Alexander comes in with some organ on this track.. Pretty psychedelic stuff at the end.  A pretty cool new band.

http://thepresolarsands.bandcamp.com
Posted by Scott aka. Dr. Space at 8:41 AM