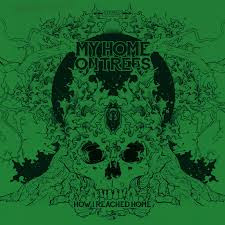 This is a new Italian four piece band from Bologna with a female singer. The CD starts off with a sample from the movie, The Road and then goes straight into the uptempo track, Winter. Steve Moss from the Midnight Ghost Train provides some disturbing vocals on this opening track. Nice wah guitars. I forgot Everything is next and this is a slower more doom orient track. Laura reminds me of quite a few of the female singers from the Rise Above bands. Her vocal is mixed a bit low so you have to really listen closely if you want to understand the lyrics. They are not included in the CD. A nice build up when I had hoped for a solo but more just wall of sound riffs. Don’t Panic starts a bit spacey with just bass and a low haunting voice and then the catchy, headbanging riff kicks in. Quite a nasty distorted sound on the guitars on this track. Later the track speeds up and the voice is a bit more frantic as it fades out. War of the Worlds starts with another sample from some horror film but I can’t place it (Groover’s Mill?) and this lasts for over 2mins and then they kick into a track called Arrow that has a great groove. Resume fades up with a slow pace and a cool guitar sound. Giovanni guests and plays some harmonica as well as guitar on this track. The album ends with My Home on Trees, which has a tribal drum beat and some spacey sounds as the guitar part grows into the riff that the song takes off with. This one has a riff like an old Pentagram song.  If you like female fronted doom stoner bands, then check these guys out and you might dig it.. I really missed that there was no lead guitar on this record to make the songs a little more than just riff rockers.


http://heavypsychsounds.com
Posted by Scott aka. Dr. Space at 4:36 AM