My friend Janne (Finnish) came over for dinner and a couple of  beers and then we headed out on the bikes to the concert. It had been many years since I had seen a show in the main hall at Pumpehuset. The last time I had seen Korpiklaani was in Vienna, Austria back in 2009, I think. They are such a fun live band.  The venue was even selling Mjod (mead) tonight. A few folks with drinking horns, kilts, but mostly lots of Korpiklaani shirts. The fans were out in force for a Monday night.
Anyway, a Danish melodic metal band with some death and some clean vocals and a lot of double bass (with only one bass drum) opened the show.  They were called Heidra and have been around since 2009 and released quite a few records and clearly had a good following. Sadly, their own soundman thought it was most important to only hear the pounding drums and bass and not the guitars very clearly so whenever the music got intense the guitars disappeared. You could hardly hear the guitar solos at all. Keyboards were clear though. They had poor sound overall. Pity.. I stood directly behind him and is sounded the same. Anyway, they only had 30mins and played a solid set and people were into and yelling , “hey, hey” when the singer demanded it with fist in the air.. Janne said they sounded like Ensifirem. 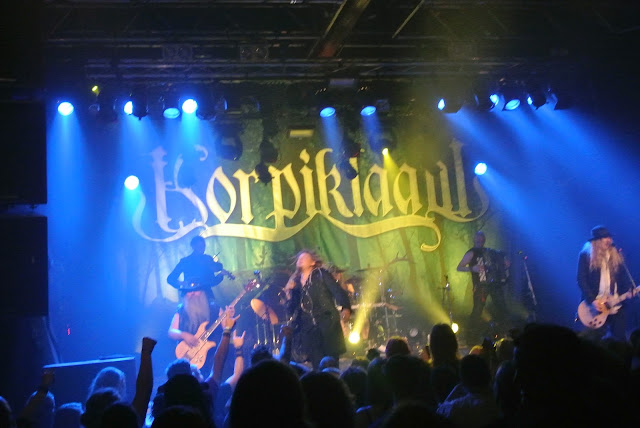 At 21 Korpiklaani hit the stage and the people went nuts. The band must have played about 25 songs, it seemed anyway.  A lot of fast and wild songs to start and then they started to mix it up with some slower tracks as well. The bass player is really great in this band and plays nice lines that bounce but also rock. The guitar player lets the accordion and violin players do all the solos and he just played riff rock! Singer is very charismatic and into and the audience love him. It is pretty wild to see all the people so into a band where they can not understand anything he sings as it is all in Finnish. I am sure there were a few Finns like Janne who can understand it but it is pretty rare…. This is still a great live and band and really fun to see..  I think they played about 95 mins..  I had fun..