This was an interesting day. My friends in Siena Root were playing across town at KB18 but I had already committed to coming to the Black Rainbows show to record the bands.  So I arrived at Loppen when Black Rainbows were soundchecking and I said hello to the guys. I had been writing mails and reviewing CDs from the guitar player, Gabrielle’s record label, Heavy Psych Sounds for some years but we had never met. The whole band were really nice people.   Anyway, this was about 16 so I headed off for KB18 to meet Siena Root. They were in a good mood and this was the first gig of the European tour and only the 2nd gig with the new singer. I was a bit bummed I could not see them as they are a great band and old friends but I can’t be a both places.. We talked for a while as they set up and they were in a great mood. We talked about their deal with Cleopatra records in the USA…. This has not gone that well, you could say.

Anyway, back at Loppen about 20 and they asked me to make Spotify playlist as a sort of DJ for the night so I programmed it with Deep Space Riders, Monomyth, Astrosoniq, Gas Giant, Hawkwind, Edgar Broughton Band, Farflung, The Spacious Mind, Hidria Spacefolk, Black moon Circle, Widespread Panic….   There was not a lot of time between bands.. No one commented on any of the music so I don’t think they paid much attention..

The Swedish band, The PreSolar Sands hit the stage a 21:30. There are a four piece with two female vocalists (on bass and rhythm guitar) plus lead guitar and drums. They had recently released a 7” record (which I will review shortly) this summer. The concert had some quite intense parts and one really long song (that I filmed). It was part dreamy shoegaze psych and some more rocking stuff. The lead guitar player did not play rock lead guitar but more noisy, wild solos with some cool effects. I loved the bass players sound. IT was really cool but I missed that she played the bass more like a guitar than a bass and some of the tracks lacked a groove… the drummer has a hard time driving it alone, in my opinion.. Anyway, I quite enjoyed their short 35mins set..

Set List: Into the Dirt, Voodoo Ritual, Counting, Prostration, Anchorsoweights, At least I know this about fire that nothing can die in Ashes

The Danish band, Måneskjold (Moon Shield) hit the stage quite quickly and played a really powerful set. Rasmus’s vocals were great and the band really seem to enjoy themselves and really played great versions of the songs tonight with a bit of jamming, improv as well. One of the new songs they squeeze in a few lines from the Bob Calvert songs, Aerospace Age Warrior, which is cool… They debuted one completely new track.. The crowd was small, about 60 people but really into it. The female sound lady did a great job and Lars did amazing projections.. 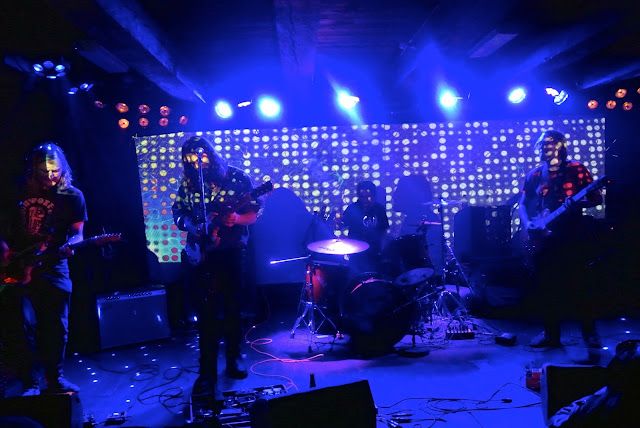 Finally, Black Rainbows get to play in Denmark.. They had never been here before and were having a good time. They would see a bit of each band and then go hang out with some of their friends from Italy that live here in Copenhagen. Such nice people.  Only about 45-50 people left when they hit the stage around 23:30….   They play the same set every night so it was the same set as I had seen in Portugal but of course much more intimate on this night…  The open with the powerful, Fu Manchu inspired No Fuel, No Fun and then right into Wolf Eyes.. The highlights of the set for me were the new tracks, Hawkdope and The Cosmic Picker… they had a great sound and groove and people were totally into it. The sound was awesome as well. The do a great 15min version of the MC5 classic, Back to Commn.. I think they might have played one more but he broke a guitar string in the last track.. I think they sold some records and t-shirts even with this small crowd.. It was a great night and I met some friends, some new people including a cool couple from Argentina (Guadalupe and Luis??), a guy from Australia..but still I missed my wife…

Set List: No Fuel No Fun, Wolf Eyes, Hawkdope, Hypnotize my soul with R&R, The Prophet, The Cosmic Picker, Black to Comm (MC5)
Posted by Scott aka. Dr. Space at 6:12 AM