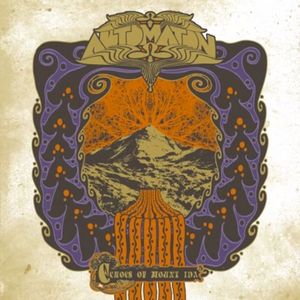 Automaton are a Athens, Greece based psychedelic DOOM band. The band previously released an EP with most of this music on a CD.  This is the first time on vinyl. The album is released on black, red and orange vinyl editions as well as a cheaper version in only a black sleeve with some embossed printing on it.  Great artwork. Dr Space (me) from Øresund Space Collective guests on analog synthesizers on the opening track, Going Down.  This starts very spaced at the beginning before the heavy Doom riff kicks in and the powerful vocals.  I love the lead guitar lines on this track and the way the space parts mix in and they play over each other. Cool track. Fear is a long one at over 11 mins and ends side A. It starts off with a bass wah and the overall productions sound is a bit more dense on this track as it takes a slow path towards………… FEAR…  The delay on the vocal at times makes it feel a bit more psychedelic as this is a slow heavy one that takes some time to grow. There is a female voice towards the end of the track you can hear singing in the background as the mood changes and the lead guitar is changing from the doom riff to a more melodic feel.  Flip over the record and it starts with Beast of War, which starts with a short drum part before the really heavy war guitar kicks in and the evil vocal enters.  Quite a brutal heavy track with some intense drumming and riffing.  Breath in Stone/Echoes of Mount Ida is another over 11 min long track with many diverse sections, the long instrumental part is really nice.. Cool album.. I am sure they will gain a lot of new fans with this one.. Also, you will eventually get to hear the “space mixes” on one of the bands web pages as I also played on a couple of different versions of Fear and Beast of War.  Cool record..