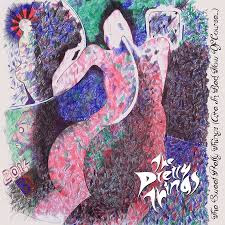 I recently bought the amazing Bouquets from a Cloudy Sky box set from the Pretty Things and have been listening to all their records and watching the DVDs the last couple of months. This put me in the perfect mood and background to give the new record a fair shake. So can a more than 50 year old group (only two originals left but they are in their 70s now) make a relevant record today? The record has 10 new tracks recorded all analog and most live in the studio and it starts with The Same Sun. Phil’s voice had matured nicely and the band play great together. And I do is a more bluesy one with a pretty heavy riff but the way the vocals are mixed is back to what they were doing in 1968 though.  IT has a bit of a jam in it and is one of the longer tracks at nearly 4 mins! Renaissance Fair (the Byrds) starts with a lot of bells but is not really that folky. I don’t know the original Byrds tune. You took me by Surprise is a dirty blues rocker with some nice effects on the vocals and a cool way guitar. Turn my Head is a really happy track with a  good bouncy rhythm. Dark Days is a darker track except the way that the chorus is sung. The mellotron gives is a mysterious feeling when combined with the unique guitar line. Greenwood Tree is a cool studio jam including drum solo. Phil does not play on it unless he adds some percussion but he is not credited at all so maybe he was in the loo!  Hell, Here and Nowhere is next and the longest track on the record at nearly 5mins and an acoustic track but I love the feel on this one. What a cool track. In the South is another interesting track with a cool rhythm and a sort of chanted vocal by Phil and then it abruptly ends. Dirty Song ends this really excellent record. This track has a darker side to it as the title might suggest. The band played an amazing concert at Roadburn Festival some years ago and I was really blown away and have come to really like this band after buying the box set. You will not be disappointed with this new record. Buy it!