Morgan Square is a five piece psychedelic rock band from Århus, Denmark. They have played a few times in Copenhagen and my friend Lone has recommended that I see them and finally I made it. Byhaven is a free outdoor event that occurs during the summertime on a small stage outside the concert venue, Pumpehuset. They have a lot of picnic tables set up, grill burgers and sell ecological pilsner beer and wine. People can bring their own as well. The shows start at 18:30 and end by 21 due to the hotel across the street. 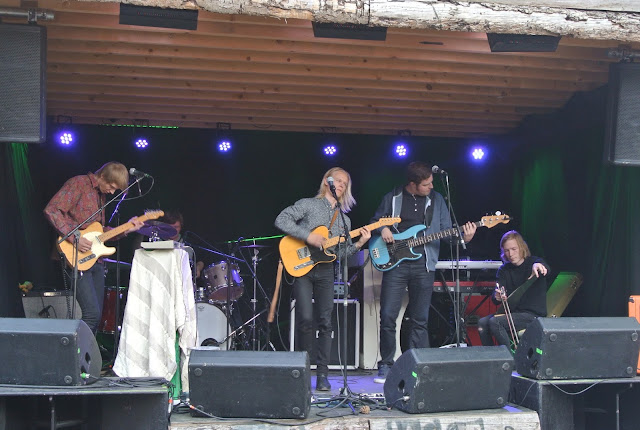 The band started a bit later than expected and opened with a new song from a brand new 2 song CD-R called Lucy, My Friend. I was immediately caught by the serious retro and spacey sound the band has. They have one guy how plays a saw and there was a lot of trouble with the sound of this (made mostly loud static sounds until the end of the show when it was better and the proper bowed sound). Some of the stuff reminds me of Syd Barrett meets the Doors. Next up was a song called White Walls and this was quite long. A very cool track and on the bands debut CD-R they produce last year.
Next I filmed the other new song called Where’s your Spirit? This is also on the new CD single. This track features some organ and they go through a couple of different interludes including a freakout guitar part. Achbaham has this Eastern feel to it. This track was from the EP from last year. Føsmennesret was the oldest song from the band set from their 2013 EP. The set ended with Irakka. All the songs are pretty long, at least 5-10mins each, which gives the band plenty of time to experiment a bit. Really cool band. Look forward to see them again at Kildemose Festival.