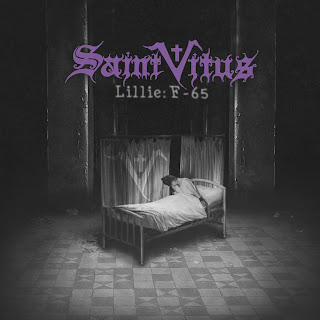 Wow.. 17 years has passed since the last St. Vitus record. This one was produced, mixed and mastered by Tony Reed (Stone Axe) at his home studio in Port Orchard, WA. The sound is by far the most produced and clean sounding record the band has ever made but it still has some great songs even though it really lacks an edge, a grit, a nastiness. The CD starts with let them Fall, a track many of you might have heard as this was released in March and they have a video for this. Slow, massive, heavy and an intense Wino vocal and a really psyched out guitar solo! The Bleeding Ground is one of the longest tracks at 5½ mins and has a very familiar guitar riff, like one you heard before on one of the earlier Vitus records. It really speeds up at the end with a cool guitar solo. Vertigo is a short 2½ min instrumental piece with some really nice guitar and a cool vibe, written by Wino. Blessed Night is almost like stoner rock with the type of groove it has. The Waste of Time is more slow and doomy and Wino’s vocal is very intense. Dependence is 7 mins long and starts with acoustic guitar and some spacey sounds panned back and forth. The monster riff comes in after a minute or so and the song slowly moves forward with some intense lyrics about drugs additction, etc.. Towards the end there is a really spaced out psych guitar section and some weak vocalizations in the back ground before the tracks main theme and lyrics are repeated. Withdrawl, the last track is basically just a lot of guitar feedback and noise and it is over.. only 33 mins but pretty intense. I dig it… Oh yeah… if you are lucky and get one of the first 1000 copies you get an extra DVD with 6 songs recorded live in Hamburg in 2010. The sound is pretty good and it is filmed with three cameras and is all in black and white. There is some small sections with backstage banter, etc.. as well. A good document of this tour, which I also saw.

http://www.myspace.com/stvitus
http://www.season-of-mist.com
Posted by Scott aka. Dr. Space at 5:00 AM