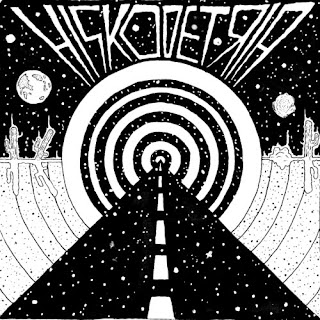 Hiskodetria is a new Finnish mostly instrumental, spacey kraut, psychedelic band. This hr long 4 track is CD damn cool. The opening 15min track called Nothing Happens, starts quite slow and spacey for the first 5mins and then the guitar riffs kick in and the band go into a more uptempo jamming piece. It has some intense guitar but then mellows with some nice guitar going back and forth between the two guitar players as the number slowly ends. Poserslave is a short melodic uptempo piece with some spoken words and the addition of keyboards but he seems a bit lost at times as the rest of the band plays together. I wonder what he is talking about. Hiskodetria is a 13min track that has a sort of phasing wall of sound guitar to start, while the bass and drums really drive the track and the spoken-sung words get more intense like Circle but his voice is not nearly as intense but the music is! Some spacey keyboards also filter into the track. The guitar riff is very repetitive after the vocal section, much like circle and an organ comes in but is mixed quite low at times. Pretty intense but it is a very low fi recording. The end is slowed down with a kind of bluesy guitar section. The last track, On the Road again (Canned Heat song) is 14½ mins and starts very spaced with some low synth sounds and the guitars slowly working their way into the track and the Canned Heat song really takes off. This is a fucking great version and while the guitar player is not technically so amazing, he has a lot of passion and grit and guts to make up for it as the blues groove just goes on. A very cool band.. check them out and you can get the CD-R for a cheap price. Support this new band.
http://hiskodetria.bandcamp.com/
Posted by Scott aka. Dr. Space at 5:04 AM