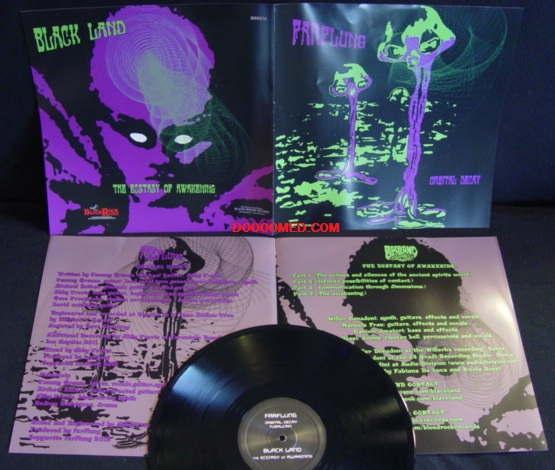 I did not even know this was coming out and picked it up at the merch table at Roadburn. It has been some time since Farflung released any new material and now within a couple of months three split LPs have been released; one with White Hills, Black Rainbows and a new band I have never heard of called Black Land. I did not hear the Black Land Heavy Psych rock CD from last year but this side is very cool. The Ecstasy of Awakening (Listed as 4 parts) starts off very slow and spaced out with just cymbals and electronics and slowly takes form. A low mixed vocal enters in as the track builds and really cool repetitive synth line takes the lead as the guitar slowly comes in riding on the back of the bass line. This track really develops into an excellent space rock song. Killer stuff…  Farflung starts off with Orbital Decay, which is a pretty heavy track with screaming vocals, flying space sounds, a lot of intensity before it drifts down into a spacey section that then comes back strong. Tubulcain is a shorter track that sounds a lot like it could have been on the last record. A more relaxed vocal but still that high energy punky edge. Both tracks were recorded at Tarantula Ranch in August 2011. The band deliver high energy punky space rock but I really hope for a bit more evolution from the band. It is really hard to tell one song from another these days. I think this is limited to like 300 copies but it is not even listed at the Bloodrock records web site.  Enjoy..