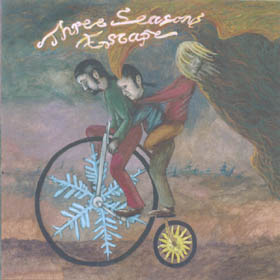 This is the first single in the new Transubstans singles club. Two brand new songs by the Swedish band, Three Seasons. Escape starts things off and this plays at 33rpm just to let you know. This is a great melodic 70s style rock song with some nice guitar solos and less keyboards than on the material on their debut record. I really like this song. Reminds me of someone but I can’t place it right now.  Wood to Sand is nearly 7 mins long on the b-side. The track starts off with piano and very nice and then really goes into an uptempo jam with great guitar and some nice organ leading into and out of the jam. This is a fantastic track and I really look forward to seeing these guys live in 2012. This one is pressed in 500 copies and they are all numbered. I think the first 100 are red and the rest are black. I believe the next singles will only be in 300 copies. I know Øresund Space Collective, Electric Moon (this one is already on pre-order at the Record Heaven site), Vibravoid and others will have singles out in this club in 2012..