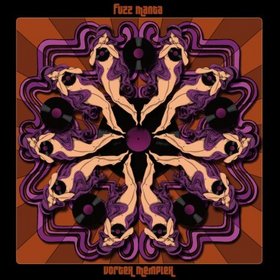 The Danish 70s rock band, Fuzz Manta is back with their 3rd record. Opus 2 was an excellent record and came out less than a year ago but I was really looking forward to hearing how this record sounded. The band recorded it in their rehearsal space and mixed it elsewhere. It is out on the Kozmik Artifactz label on three different colours of vinyl in a fantastic gatefold sleeve with a poster as well. The songs are all between 5 and 8 mins in length. Side A starts off with And so she speaks. It begins with some acoustic guitar and then the track takes off with a heavy bottom end sound bluesy guitar (including slide) before Lene comes in on the vocal and it gets a bit heavier. A fantastic opening number with Freddy playing some great solos as well. A very melodic vocal line helps to make this a quite catchy track. Electric Heat is next and another heavy 70s rocker with a slower pace and a quite in your face vocal. This track has a really cool wah guitar section that is a bit psychedelic as well as it really builds up at the end. Vertigo reminds me a bit of a modern version of Hey Joe mixed with a bit of Robin Trower . Freddy plays a beautiful blues solo as well. I also like the spacey wind at the end of the track as well. Between the Lines is another hard hitting rocker with a Clutch like groove and Freddy laying down the wah solo. Torke is a slow and easy blues track with a slight spaceness to it as it begins. I really like the layered guitars as it builds and reminds me of WE (less psychedelic Last Stronghold of the Freaks!) during these spacey parts. Then the song structure changes totally but with a really happy vibe. It is a great psychedelic number. The vocal seems more mixed into this track compared to most of the other tracks, where at least on my stereo, they are a bit too in your face. I honestly thought the record was over but the band has placed like 3mins of silence in at the end of this track and then the music fades back up from some sort of heavy jam right into the wah solo section. Finally, here in , we are developing a band that writes kick ass 70s style material and plays it well. A fucking fantastic record.

http://www.fuzzmanta.com http://www.kozmik-artifactz.com
Posted by Scott aka. Dr. Space at 7:25 AM