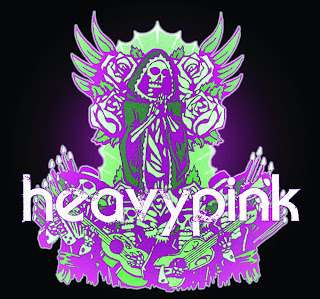 Heavy Pink is another side project band from Tony (Mos Generator, Stone Axe). As far as I know he played all the instruments and everything himself. The A side song is called Flower and Song. It is a slow heavy melodic track with acoustic guitar (briefly), electric guitars, a bell that rings in at regular intervals. I really like the vocal on this one with a bit of reverb. A great track but I felt like it ended too soon, before any kind of solo, etc.. The B-side is the track There is a Light. This is also melodic with some great layering of the guitar as he plays with himself several times (you know what I mean) as the track slowly builds up. It is only guitars and vocals for most of this track, until the very end, when it gets heavy and just ends! The 7” is pressed in only 300 copies. I was expecting it on pink vinyl but it is black.. Great stuff. Would love to hear an entire record but with some longer tracks where more ideas could be developed. Tony Reed is a creative guy.. Look forward to hearing the new Saint Vitus record that he recorded and produced with the band.