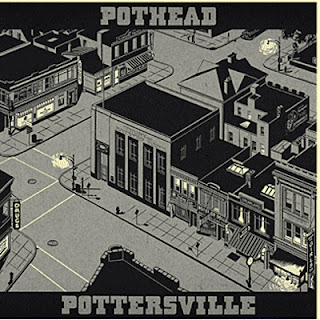 Pothead is back with a new studio album, their first in 4 years! They used to be a band that put out a new record every year but as they age it seems to take them longer but at least they maintain a great high quality. This CD (and their first release on vinyl since the 90s and it comes with 3 Pottersville 1 zillion dollar bills!) has 13 songs in 47 mins and a lot more guitar solos! C’mon starts the CD off and is really funky, a bit electronic and unlike any Pothead song I have ever heard but damn cool! Can Go has a really cool rhythm and guitar in this most catchy track with a melodic vocal chorus. Stand has one of the more heavy metal guitar riffs on the record. Rock on, Let’s Rock also has a heavier rock riff but such a killer groove. Love in a way is totally different song with a light keyboard, acoustic guitar and really great singing by Brad. About the Word is a sort of slow bluesy thing with some multitracked vocals. A very passionate song. Flip the vinyl over and it starts with Atomic, which will remind you a bit of the track Stadium, with a repetitive keyboard line that is quite spacey, and a simple groove. Brunhilda has a slight country blues tinge and really awesome singing by Brad. Digitus Infamis also has a slow groove but a harder guitar riff and a really cool guitar solos section! Far out lyrics also. Sky Fallin’ In has that simple heavy metal riff and Brad switching is lyrics from spoken words to a more falsetto vocal while the groove just moves the track down it’s path. All Fishers has more spacey slow pace and some really nice guitar by Brad as the track has this sort of ringing drone also. I like this one very much. Hope they play it love and he can stretch out the guitar section! Relax Man also shows Brad playing some mean leads and having fun. The LP and CD end with Little Dipper.Brad is a totally amazing song writer. Pothead just has their own unique signature and way of writing and composing songs. After 4 long years this is a really great record with a lot of memorable songs but also some really new ideas.