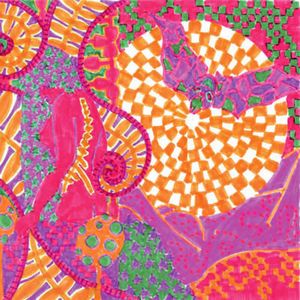 The Belgium band, Cosmic Trip Machine are back with another epic story record about a guy named Jimmy who goes to the psychedelic Electric Banana club and falls in love with a girl called Myrtakia and it turns out she is a vampire and it gets darker than that. The material was recorded back as far as 2003 but the real record was finished in April 2009 and finally released on vinyl. Anyway, the LP contains a lot of short pieces that are all running together as one long trip. It is guitar, bass, drums and additional organ, sitar, sitar guitar, flute, theremin here and there. The songs are all really cool and it is a more 70s vibe and has a harder edge to it than the bands last record. The A side starts off with a acoustic psych folk feel as the story begins. Psychedelic Twist sounds a bit like Mandragora light show society. A flute intro leads into the There’s no sympathy for the Devil, with a loose attachment to the Stones version. It feels Good is like some 70s funk soul stuff, which totally catches you off guard but it is great. This is a strong contrast to the heavy and dark Under the Control of Evil that preceded it. Side B starts with some acoustic guitar and sitar pieces before getting pretty intense again and strange as well with the devil talking. Lots of great guitar solos on this record and I really like the one on This is Jazzy isn’t it! The inside of the LP gives a pretty detailed diary of the recording of the record, which is cool… Brilliant record… Oh yeah.. the 7” is a single version of the track (Not) Very High and the b side an extended version of Revelation Evil that is really fantastic!

http://www.nasoni-records.com http://myspace.com/cosmictripmachine
Posted by Scott aka. Dr. Space at 4:18 AM