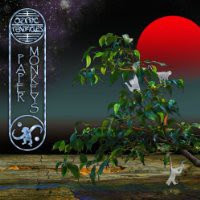 It has been about 3 years since the last Ozric Tentacles record and I used to anticipate these records with sure dedication of the hardcore fan but the last few records show the Ed Wynee project heading into a more and more electronic area and away from rock music, so I have lost interest in a lot in this band that used to be one of my favorites. Don’t get me wrong, many of their records are all time classics for me but the music they make today does not really hit the spot for me. The band has moved into being a new age psychedelic electronic band with a bit of rock. Anyway, the CD starts off with a intense track called Attack of the Vapours with wild programmed beats and drums and sound effects. Ed plays some cool guitar but it is mixed way to the back and panned all around. As his guitar fades away it becomes almost all electronic and then the new age synth section takes over with uptempo percussion and programmed drums. Lemon is also highly electronic but has a pretty cool bass line that sounds like a mix of electro bass and real bass. The drums also sound like a mix of real (very thin) and programmed. The synth line that drives the track is pretty cool. Ed’s guitar kicks in about 2½ mins in and has a really cool effect on it but that lasts 20secs and disappears again and back to nearly totally electronic music. This has cool and interesting sections and a high energy on this track but not a lot of guitar. Another guitar solo kicks in at 4½ mins for 45 seconds and cool to hear Ed experimenting with more effects on his guitar. Flying Machines starts with synthesizers and is a sort of new age spiritual synth trip with a bit of psyched out guitar thrown in here and there. Sounds like Ed could have made this one entirely on his own. A sort of trance like part and even a brief electronic flute precedes Ed next guitar solo section. This brief section reminds you of Erpland days but all too briefly. The song ends in a very techno electro fashion: Instruments sound very synthesized and not very organic. Knurl starts with some percussion and Brandi kicks in with a bass line and some drums and then at 50 seconds the synthesizers start another like pan flute like new age arpeggiation and Ed enters with some guitar very briefly. There is a nice short sitar section (probably not real as it was not listed as an instrument). This is one they might be able to play live. Right now on the tour Paper Monkeys is the only song they play live from this record. At 4½ mins Ed comes in with another sweeping solo for 45 seconds and then the pan flute like synths return. Lost in the Sky is the longest track so far at just over 7 mins and starts with very new age synths again but Ed kicks in with the guitar quite early as Brandi lays the deep bass line and Oli follows with the drums. It is totally unclear what Silas (Ed’s son) contributes since they play very similar synths and Ed is most likely playing most of them on the records. This track has the most guitar by far so far of any song and another they could attempt live to freshen up their set. The guitar drops out at 3 mins and it is all synths, bass and drums for 1½mins and then Ed comes back with a solo for 30 seconds and back to the melodic electronic techno like stuff. A real synth solo is played at around 6 mins that is pretty cool. Paper Monkeys is next and my favourite track on the record as it reminds me a bit more of the older days OT. It has a bit harder edge and the drums are mixed more like a rock band and not so thin and electronic. At 3mins the guitar falls out and Ed takes the solo synths and plays a normal OT like section and then a really spaced out solo sound that is really cool before the guitar returns and Ed kicks into solo mode again.  Plowm is another track with a lot of guitar that they could probably play live. A very high energy track with spacey psychedelic guitar, a driving synth rhythm and smooth stoned floating bass line. The Will of the Wisps is the longest track at over 10mins and starts very slowly with lots of beautiful new age floating synths and some basic drums and a nice bass line. There is an almost flute like synth (this is where Jon would have been playing in the past) section. It slowly builds up and you keep expecting Ed to kick in with his usual predictable short solo and disappear but he does not until the 9½ min and then only for like 15 seconds! It has a very funky ending. The CD closes with the beautiful spacey new age track that sounds a lot like Nodens Ictus called . Ed is still the master of sound that stimulates your brain like few others can but the music is just too electronic and lacking in a human nature some how but great for psychedelic head trips … Shpongle fans will also dig this a lot as OT have a lot in common with Shpongle these days.