Titan- Pacific Living cassette (Who can you Trust 05) 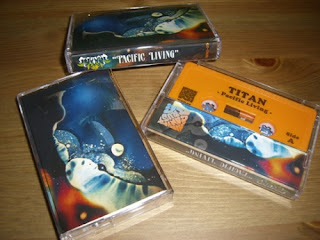 Titan is a based psychedelic band who have made some pretty damn cool releases. This is a cassette only release of 4 tracks recorded live in a radio studio in 2008. Three of the four tracks are from their record, A Raining Sun Of Light & Love, For You & You & You, and the last track, Highlands of Orick, is perhaps a new song since it is not listed on any of their records at Discogs.com. Hashishins Ohel starts this off and this is a real progressive rock work out with complex guitar and organ interactions before the track really spins itself out into more psychedelic territory and the organ is really freaked out and spacey first and then the guitar follows. Wow… Obelisk Orbit Overdrive seems to come out of Hashishin and starts slowly and spacey as well with lots of electronics as something starts to brew underneath and then the drums kick in hard and fast and the spacey guitar jam takes off!!!!!!!!!!!!!!!! The organ comes back in the last 3rd when the intensity drops and the band head into a different realm of space. A really great space rock track and quite psychedelic. Good mix by whoever mixed it. Flip the tape over and you get Afruf der Pilz. This also a very organ driven, dynamic and complex song. Reminds me a bit of a more psychedelic Siena Root at times but they jam and space out in a totally more far out way than Siena Root. The organ solo and guitar section is really psychedelic stuff. They come back to the main theme and then really slow it down and float out into space. The next section is quite dynamic as well and more flanged out and space rock like before it comes way down to a drone as it fades nearly out before coming up with a familiar bass line and organ as it builds and ends. The last track starts quite upbeat and complex with a lot of interaction between the bass and organ then it takes off in an organ driven fashion once again. A really ripping guitar solo is played in this one as the bass player just lays down the killer lines when the organ playing draws back. Wow.. This is a totally killer tape and probably one of my favourite releases I have heard this year. Really jamming stuff. Fans of Astra will like this although there are no lyrics.

http://whocanyoutrustrec.wordpress.com/
Posted by Scott aka. Dr. Space at 9:53 AM