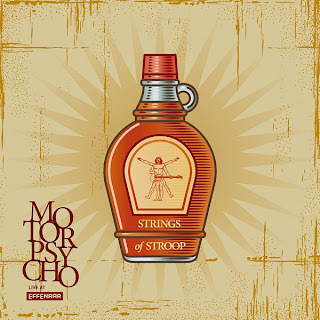 Motorpsycho played a concert at the Effenaar venue in Holland to celebrate 40 years of live music at this venue and the band has played their many times. They decided to release a vinyl only record available only at this gig of live recordings they have made from this venue over the years. I think it was only pressed in 500 copies and you could only get it at the show. I was not there but got very lucky to get a copy of this record! Anyway, side A starts off with a super cool version of Psychonaut (still played often today) from May 7th, 1999. The version has a lot of energy and Bent is really passionate in his vocals. The mix is not super clean but pretty raw which adds to the power of this one. Going to which features a long piano solo by Snah is also realy good. I always liked thjs song.  Flip the record over and the tracks come from a gig on May 23rd, 2010. It starts off with Whole Lotta Diana but the band is in a fucking jamming and intense mood on this record side and really flying. A mellow track called Come on In is next but then not listed on the record, the band kick into a killer version of Sheer Heart Attack by Queen (I read recorded in May 2006)! They say it is the first time they ever played it! Great record.. I am so happy I got a copy.