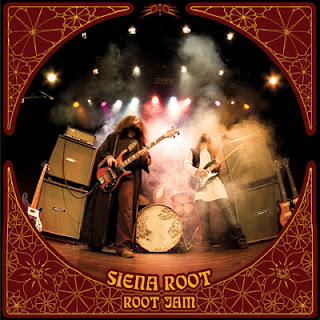 The 70s rock band, Siena Root has finally released their promised double live record and it is great. Over the past several years the band has been making analog recordings of many of their concerts to try to capture the perfect performance for each of the tracks that make up their evolving live set with a different cast of singers appearing all the time. In the end, they were not satisfied and set up 3 nights in at the Walla Scen and this is where all but two of the tracks is recorded at a different acoustic show. The LP features the singer from their first record (Oscar), Sanya is the primary singer and sounds great. The LP opens with an introduction and the band kick right into The Rat from their first record with Sanya singing. Next up is Waiting for the Sun and features Stian Grimstad on sitar. They have not always played this one with live sitar and this is a really jammed out version! Bhimpalsi is an instrumental song with Stian on sitar and KG on organ. It has a really cool bass groove and melodic elements and a great jam. Into the Woods another from the 1st record and features Oskar on passionate vocals as well as a wood flute solo (Anna Sandberg) and Tangman on hurdy Gurdy to make it very cool. Words is the next track and also from the first record and features Oskar and Maxi dread on guitar. The next two songs are acoustic (Trippin’ and Bharavi Thumri) and change the vibe and energy of the record but are really fantastic and feature Jonas Ahlen on vocals. I have never heard this singer before with Siena Root. Bharavi features KG on sitar and Love on duf and Sam on derbuka. Dreams of Tomorrow features Jonas Ahlen on vocals, with a more husky but also nice bluesy voice and goes back to the heavy and dynamic rock as the band really rips this one up! This features KG and Maxi Dread on guitars. Long way from Home starts off with an organ introduction by KG and is very Uriah Heep inspired for those who know the song. The band add violin as well and Johan also sings this song. The record ends in a totally jamming style with long work outs of Rasayana (Stian back on sitar) and Reverberations. I love the guitar riff that kicks in on Rasayana at 3mins. The band really takes off in the end part with a great guitar solo. Reverberations is the longest track at 16mins and a great way to end. Listen to the crowd…

The release is a double CD (about 90mins) and double vinyl. This is for sure one of the best releases this year and it has a fantastic sound production. I think is fair for me to say that this is not what the band is always sounding like when you hear them on tour as they rarely have flute, violin or more than one vocalist and they don’t usually stretch out and jam as much on some of the songs as they do here. Probably ’s best band! Catch them on tour in Europe in November. Copenhagen on Nov 27th (I will be the DJ!).

http://www.sienaroot.com http://www.transubstans.com
Posted by Scott aka. Dr. Space at 10:05 AM