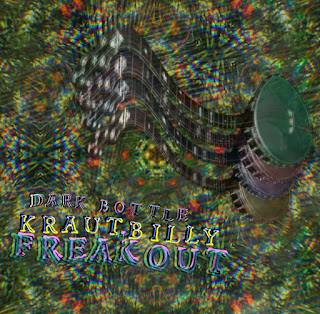 Dark Bottle are a Finnish psychedelic rock band that feature banjo player Donald Lupo. The lead vocals are shared by Donald and Teemu. This CD was released at the end of the year in 2020. It features 4 long tracks and starts off with the moody Molly Malone taking some inspiration from Irish folk but also rocks and then gets really spaced out at the end. Die Bibliotkek von Babel starts very slowly and is sung in German by Donald. The banjo, bass and guitar are the only instruments at the start. Then this track really rocks with some great guitar solos and I add some spacey synths but sadly they are mixed so low you almost don+t hear them at all. Great psych rock track.  The Sun only Shines when I Leave starts with some delay guitars like Anthem from Rush and then the banjo kicks in and off we go. A great mix of bluegrass and psych rock. Killer guitar solo..  Make Finland Rake Again is probably my favourite track as it is a piss take on Donald Trump and just also a great psych rocker. I get too mix in a bit of modular synth if you listen closely.  This is the bands third album and I think it is a real triumph and fantastic. I hope they also release this on vinyl..  Check ‘em out!