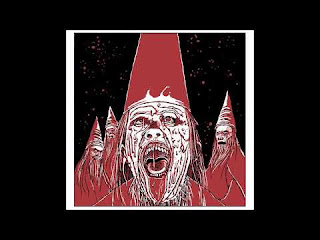 Måneskjold was a Danish space rock band who have moved more into a psych, hard rock band. This is their 2nd single from their new album due out in April on Kommun2.  Anyway, this track rock!  I really liked it a lot and it is not sung by Rasmus, who writes and sings on most of the tracks. It is sung in Danish and the title is hard to translate. The rest of the tape is a more lo fi recording of some rehearsal jams. The long track finishes off the tape side with a track that starts very slow and spacey before it builds up into something interesting.  Cool band. This tape is only made in 20 copies (numbered) so it is probably already sold out.  Enjoy..