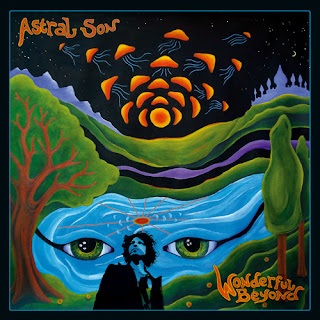 Astral Son is a one man project of Leonardo Soundweaver from Holland.  This is his second album on Sulatron records and his 4th under the name Astral Son.  The vinyl is released by Headspin, while the CD (with bonus track) on Sulatron. This record has a lot of influence from early Pink Floyd mixed with early Gong and Steve Hillage. The opening of the 2nd song called Creation is very much a total tribute to Steve Hillage. He really nailed the guitar sound and vibe.  Time and Space is very much like MORE era Pink Floyd. Lovely simple acoustic guitar, haunting and beautiful.  Your Mind is a more uptempo track with some nice bells, spacey synths before the main riff kicks in on this short track. Moving Slowly starts with just voice and guitar (with a very low mixed synth) singing a sort of poem. Very stripped down.  THE UNIVERSE has a very strange effected voice at the beginning and then the main bass line really takes the track in a new direction with a nice layer of psychedelic guitar as well. Cheap Magic is very Barrett inspired as well to start and then it goes into something totally different and turns into one of the best tracks on the record. Nothing New ends this excellent record with a nice trippy song with some unique twists and turns. The Well has some of the most psychedelic stuff on the record with some nice multi-layered guitar work. The Journey starts with a repetitive guitar line that is played over and over until you really hope it will change and then it doesn’t but layers of other instruments come in and go away again and the riff almost disappears in the layers of voice and synths. Interesting track.  Morning Dew is not the famous track but his own creation.  Quiet Love is a soft acoustic track with some nice bells, keyboards and other surprises. Nice lyrics. Very much a throw back to the 60s with a modern production. A nice bonus track.