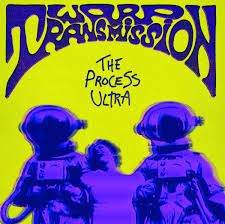 This is the 2nd album on Creepy Crawl by the Finnish psychedelic rock band, Warp Transmission. The first was entitled Tamud Shun and featured a number of tracks recorded live in the rehearsal room plus others. Some of it had been released on cassette on the Heavy Meditation label. This new record features 7 tracks. Ultra Thrust starts things off fast and furious in a whirl of psychedelic rock and sounds.  Cast into the Process starts slowly with some spoken words and a freaky bass like in a dungeon.  After a min or so the psychedelic vocal kicks in and off we go with a powerful trip! A bit of old school Hawkwind vibe in this one as well as it fades down for the Insect. A fast and psyched out track with some intense vocals and a raw low fi sound. Rips your head clean off. Wipe Out is super psychedelic with just a very spaced out effected vocal and bass (mostly). That is the end of side A. Crash like Waves starts with an opening guitar line and slower stoned groove (a bit like some of the slower White Manna stuff) and a distance dreamy vocal. This is one of the longest tracks on this album at nearly 7 mins. The Stranded features a very repetitive guitar line and highly effected vocal and some eerie synths. Quicksilver Mainstream is the last track on album another one to blast you into psychedelic oblivion ala Yuri Gagarin mode.

This is a pretty cool band like a mix of White Manna, GNOD, the Heads and Terminal Cheesecake.. Intense and psychedelic.