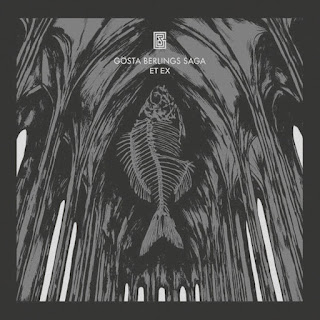 The process of making a GBS record is a long one. Each track is crafted to perfection (ala King Crimson), each note, each drum hit analysed and the results, are usually a very stunning album. The band is on their 3rd guitar player now and to play in this band, you must be impressive. The album was recorded in many different parts at 7 different studios over the past few years. The tracks are a bit shorter, 8 in total. This is a totally different album from any that have come before and it even has vocals on one of the tracks!  A lot of experiments with programming and strange twists and turns. A very unique record and hard to describe.  It starts off with Veras Tema, with some freaky keyboards that merge into a very clean and melodic section and then another layer of synths fades in underneath and at 01:48 you get the first bass and get some shifting layers of forward and backwards sounds and then it is over. The Shortcomings of Efficiency starts a new mood, more dark, ominous and then Alex kicks in on the drums at about 45 seconds and the energy level goes way up.  The bass and guitar are a bit King Crimson like but at a bit over 2 mins changes, followed by a nice guitar solo section (Henrik Palm?) and later the vocals (Ben and Michael) kick in and wow.. what a radical change.  This is the most intense track on the album and one of the longest at nearly 7 1/1 mins.

Square 5 starts with a similar keyboard, slow progressions for the first min and then a new synth sequence kicks in and then some drums, very repetitive, almost like a drum machine, and then another new layer of synths begins. It is quite a bit like Kraftwerk might make this track. Guitars are not very prominent until nearly the 5min mark on this 7 min dreamy track. Over and Out ends side A of the vinyl record with some mellotron, synthesized bass lines that merge into the real bass line (at least that is what it sounds like). The drums have a sort of lo fi trashy sound which makes it special before the film music like keyboards filter in over the mellotron. Some flitters of guitar here and there appear as well.

Artefacts feature the grand piano to start side B. It is complimented with another darker keyboard. The guitar line is beautiful on this track but as most of the track so on the album, the keyboards are the main focus. A repeated synth line dominates the end portion while the grand piano keeps playing in the background. A nice lead synth solo is later added on top. There are drums and bass (and maybe some more guitar) in there as well but they are not the focus of the song or the mix. Capercaillie Lammergeyer Cassowary & Repeat starts with a repeated synth bass line that slowly another synth layers on the top (ala Tangerine Dream- Kraftwerk) but then by 30 seconds the mood has changed a lot and the highly effected guitar takes the lead (at least I think that is what it is??) but by 1:20, it drops out and the synth lines increases in speed and before 2mins the drums have come in.  The main keyboard line changes to a more dark theme and repeats for a while and then drops out and you get a distant church organ interlude before the track builds up again.

Brus från Stan is a short guitar piece with someone humming along as well. Fundament see the return of guitarist Henrik Palm and brings back a bit of intensity built on top of a repeated programmed drum to start. Interesting track with a movie sound track vibe for a thriller or horror film.

You just have to check this amazing Swedish band out.  IT comes in a clear vinyl versions (100 copies) and Silver (200- sold only via the band web site).  They both come with a CD as well. No extra music though.