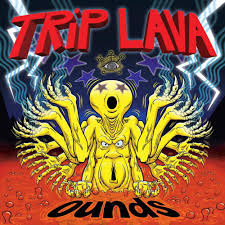 Trip Lava is the project of Joel Lee. He likes to experiment with sound. He records all the instruments himself and is a big fan of strange sound manipulations. I reviewed his quite strange and intriguing album, Oddball in the Corner Pocket way back in 2007.  Well, Joel is back with a new CD release called Ounds and it features 10 tracks. OundsPt 1starts things off with some drum samples, strange sampled and manipulated keyboards that drone, twist and mutate until a sort of drum groove and more melodic synth takes over and some bass guitar slides into the mix. Some very nice bass playing underneath the sort of Casio keyboard sound. The track fades out and Oblivision begins with some really spacey keyboards and the track really drifts but ends quite suddenly.  Ouseh of Orsmirr has some strange sound effect samples mixed with some cool bass playing, frantic drumming (at times) and then the cheasy keyboard. It is a weird combination but it works to create an interesting track, not too dissimilar to the opening number except the freaked out ending samples. OrfOntrastic starts with some looped and distorted sounds but evolved into a sort of drum and bass drivin’ track later goes into some looped guitar. Creative.  Ongadays starts with a fender Rhodes like keyboard with some long delays. Is that bass or guitar that compliments? Bass, I think. I really liked this track. Osmicc Oldeng Ordsw of Onmeldag is another bass drum and keyboard track with the focus on the lead synthesizer. It features a very cool solo but later some strange vocal manipulations and other bizzare sounds are filtered into kick it out of normality. Oopl de Oopl starts with a arpeggiated synth that he manipulates the speed back and forth before some variation occurs. Strange ending.  Oomsmushr starts with a guitar strum and then off into the wilds of nature we float for 1 min and then things head off to the carnival funhouse and later the insane asylum. The CD ends with Ounds pt2, which is broken into 4 parts.  What a trip!!  Enjoy as you enter into Joel’s world of sound..

https://www.facebook.com/TripLava/?ref=br_rs
http://www.sharkrecords.com
Posted by Scott aka. Dr. Space at 6:58 AM