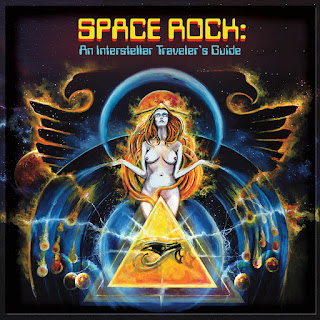 My band, Øresund Space Collective, contributed a track to this 6 CD box with booklet. We are the 3rd track on CD1. This is a pretty amazing collection of the original space rock bands from around the world and many of the best from the current scene.  Almost all the tracks here have been previously released but I know the Earthly Society track is unique to the box set, just for the collectors. Tangerine Dream, Nik Turner (only person with 2 tracks), Hawkwind, GONG, CAN, Alice Cooper, Ozric Tentacles, Faust, Steve Hillage, Chrome, and Guru Guru are the big names.  A lot of cool bands from the modern scene as well like White Manna, Yuri Gagarin, ØSC, Maat Lander, Vespero, Black Rainbows, Dark Buddha Rising, The Re-stoned, Oranssi Pazuzu, The Space Lords, Pyramidal, Hidria Spacefolk, Secret Saucer, and many others. The booklet has an intro by Dave Thompson and then each and every track and band has a nice description and web links and a picture. Very nicely done and a great introduction to space rock and psychedelic music, if you are not that familiar with the scene. It is not all space rock music, at least by my definition but plenty of amazing stuff and some really strange tracks like Bob Calvert telling a story of how he and Lemmy took a lot of pills at after Hawkwind’s van was to be stopped and searched by the police, Steve HIllage and William Shatner doing Rocket Man by Elton John, and Gilli Symth (with Daevid Allen) spoken word piece.. Fun though.

http://cleopatrarecords.com
Posted by Scott aka. Dr. Space at 11:06 PM