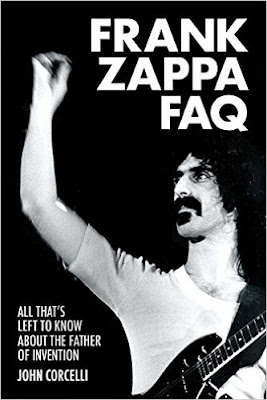 Does the world need yet another book on Frank Zappa, that is the question?? I own Frank in his own words and a smaller one as well but have not read any of the others besides this new one. My first experience with Frank Zappa was when I was about 12 when a kid from school, named David, whose older brother played in a rock band, he played us Overnight Sensation. I was like what the hell is this, songs about Eating Yellow snow, and other strange subjects. I was intrigued. I was lucky to get to see Zappa on the Joe’s Garage tour in 1980 when I was 17.  It was a pretty mind blowing experience. I did not become a full blown zappahead until later when I was hanging out with my friend Paul and my cousin Cliff, where I got deep into Zappa and eventually recorded all of his records on tapes from Paul, Cliff and my friend Jay. Wow… Anyway.. that is my story…  This is John’s.

John tries to take a fresh approach. The book is broken up into 33 small chapters as well as a book recommendations and a complete discography, including the 30+ new releases since Frank’s death.   I learned the most in the sections about his early life as I had not read the books by his siblings, which most of this info is drawn from. The Year Book chapter, which lists nearly everyone that every played with Frank including about 100 words and their birth and death dates is very interesting as well. The cover band chapter also tells you about the most famous of the Frank Zappa cover bands but is not an exhaustive list. One of the most unique and interesting chapters was interviews with women about their opinion of Zappa as there were quite a few songs that if you did not have a sense of humor like Crew Slut and Jewish Princess.  Other chapters about Zappa's TV appearances, the PMRC, about humor and music, etc..  Even if you have read a lot of books on Zappa, you can still learn some new stuff. If you have never read about Zappa, I would recommend picking this one up and combine that with The Real Frank Zappa, which is mostly written by Frank himself.

http://www.backbeatbooks.com
Posted by Scott aka. Dr. Space at 11:50 PM