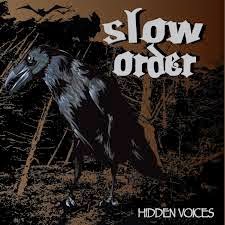 Slow Order is an instrumental four piece from Bologna, Italy.  The CD features 7 instrumental tracks of heavy metal rock and roll. This is the follow up to the bands previous EP entitled, Pyramid towards Oblivion.  Bokor’s Call opens things up also includes a short slow section with some synth before heading out with some ripping guitar and then back to some different riffs. Someone in the band also makes some occasional evil sounding vocalizations that you can’t quite make out. Crusade of Visigoth continues the heavy slightly more evil doomy groovy. The mid- section is again spaced out with some double tracked guitars and synths before returning to the main refrain. Drunken is a track where I really noticed the intensity of the Ale on the drums. It really comes across like he pounds the shit out of the drum kit. Garage Anthem starts off fast and furious and then becomes a bit like Candlemass and then back to the thrash metal. Wow.. In the Centre of the Sun is another more metallic track with intense guitar chord sequences and a really spacey ending with some chanting that leads directly into Pazuzu. By this point, some of the guitar riffs are starting to sound too much a like. He Dave does throw in a bit vibrato though on this one and some layers of synth sounds as he uses a cool effect on his guitar before going back to the well used riffs. Sabbatai Zevi has the occasional ringing bell to compliment the soundtrack of the end of the world. Wisdom of the Universe ends this record with some acoustic guitar and a sort of sitar like drone sound and later a synth drone and some percussion. A very cool way to come down from this heavy trip.

A mixture of Karma to Burn style stuff with more riffing metal and a bit doom thrown in with some space parts in the middle of a few tracks. That pretty much describes the whole record.

http://www.issuu.com/miskatonikgp http://sloworderband.bandcamp.com
Posted by Scott aka. Dr. Space at 11:31 PM