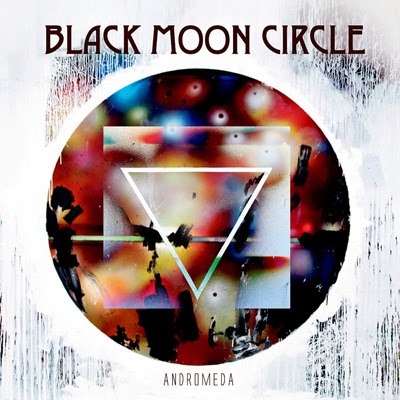 This first full length record by the Norwegian band, Black Moon Circle (BMC), and it is a psychedelic rock monster! Full of cool songs and moods, massive riffs, spaced out sounds and a killer drummer and bass player that just groove, while guitarist Vemund, plays whatever the hell he feels like and rocks like a MF…  Machine on the Hill is a 9½ monster track that starts slowly with just some loud drums (sounds really awesome like he is playing in the living room if you have it cranked loud!) and spacey guitar parts as it slowly builds up. The bridge has a super catchy chorus. The band hits overdrive and this track has a great jammed out ending.  Jack’s Cold Sweat has a heavier riff and more intense singing from Øyvin as the band reaches just the peak, where Vemund can take the guitar to the skies.. The band is complimented by Dr. Space adding some far out space sounds in the background to take you out into orbit! “Step into the afterworld, follow the others into the void, take the step on the golden tongue, follow the dream forevermore….”  Supernova slows things down and starts off with some heavy bass drones with a bit of delay on it as Per slowly brings the drums in. Vemund takes his time to settle into the riff of choice for taking you on the journey. Øyvin sings with a melodic, slowly sung vocal with a dreamy character through most of the drifiting track that lasts about 6 mins and finishes side A.  Dragon starts off with some acoustic guitar and a bit of other guitar before the drums come in around 2½ mins and but you have to be patient for the arrival of the Dragon…..  then you will feel the dragon rising and the track just becomes a monster and again Dr. Space makes another appearance around 5½ mins. Vemund plays some really intense guitar parts as the whole sound becomes a huge psychedelic trip lasting 3 more minutes. Phew…. Andromeda is a 15min track that closes the album and has many moods and starts off a bit like a Gov’t Mule song, with its slow melodic guitar build up before the heavy riff kicks in after the 1st long vocal section. Around 5½mins, the band is ready to jam now and Øyvin steps up the bass intensity and Per as well and then it is Vemund’s turn to deliver space guitar. Around 10mins Vemund has really let loose with some great solos as the whole band just lifts the track to another level around 11½ mins when Vemund kicks in with another space guitar effect and Øyvin starts killing it on the bass.. Wow.. what a fucking jam…  Look out early next year for the Studio Jams Vol 1!