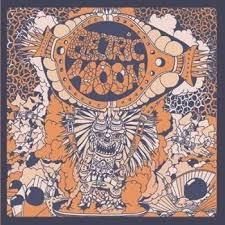 Electric Moon is back with another live record, this one was recorded on Sept 7th, 2013 in Innsbruck, Austria and features 2 album long side pieces. Innside (21:32) starts off with a nice keyboard intro before Dave straps on the guitar and they hypnotic heavy Psychedelic stoned trip begins..  If you are a fan of the direction the bands last 5 or so releases have had, then you will dig this as well if you let yourself just become one with the heavy fuzzy, flangy space guitar from hell…. As this is some heavy, dark stuff as this jam builds. The intensity drops a bit at 15mins but not for long before a very flangy guitar section fills the soundscape and Lulu and Marcus just keep pounding away. Heavy intense space music. Phew..

Flip the record over for Outside (17:19) and this has a more dreamy guitar to start things off but still rumbles along with a pretty fast pace with very intense drumming but around 11mins as the swirling sound has gripped your tighly around the neck, Sula plays some lead guitar stuff that is pretty cool and moving beyond the heavy riffing, at least for one minute before being sucked back into the space guitar vortex and back to the heavy groove the band has laid down… Phew.. another intense trip.. If you like what the band has been doing for the last many record you will dig this.. if you are looking for something less intense, you will not find it here. The band have found their sound and are sticking with it for now with little variation but damn if you like to have your head ripped off by dark, violent, flanged out madness, this is the place, deep inside the Electric Moon….