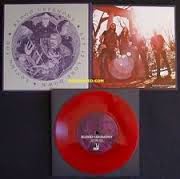 The Canadian band, Blood Ceremony is back with a new 7” to debut one new song from their upcoming record. The B-side is a cover of the obscure Scottish band, Iron Claw. Let it come Down is a cool short 4min song which features a lot of flute and a short guitar solo section, while having a good drive and vibe. If you have their other material you will recognize the style, if you are new to the band, think a bi classic Jethro Tull meets Human Instinct.. before I played the b-side I pulled out the Iron Claw and heard their version so I could compare for you. This has a cool riff and the band seem to maintain the same feel but replace the sax (which the band said thought was maybe a mistake) and replace it with a keyboard line (mixed pretty low) but they kept the flute line at the end. Good choice.. Hope they play this one live.. A cool 7” with nice artwork. It comes in multiple colors. Only the clear ones are sold out at the time of writing this.

http://www.bloodceremony.com http://www.riseaboverecords.com
Posted by Scott aka. Dr. Space at 9:42 AM