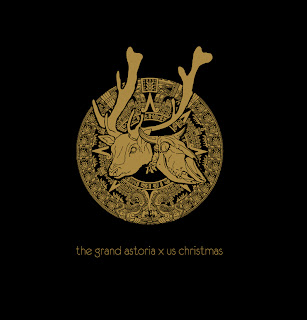 I had never heard the Russian band, The Grand Astoria before, only read about them but I am a follower of US Christmas so I was very curious about this 12”. The Grand Astoria start the 12” off with an LP side long track called To Whom it may Concern. It has fantastic lyrics and they have a very unique sound and are a big band, featuring 10 people. It is a strange mix of heavy, psychedelic, progressive, some screaming vocal at times, but a lot of stuff going on all the time as it slowly builds up. The cello, trumpet and trombone come in a bit later in the track when the sound sample from an archaeological show. The next section is really spacey before the track builds up in intensity. The lyrical content is more intense as well. This track is quite a journey. Great stuff.

The US Christmas side I was hoping was new material but it is not. It is two live tracks from the Great American Music Hall in San Francisco (Amazing place to see a concert!). Silent Tongue from the Salt the Wound CD is first and a slow spacey track. Next they perform the most instrumental song, In the Night, from the Run thick in the Night LP. Nice open sound quality but sometimes difficult to hear the two drummers plus hand drummer, violin and synthesizer. If you are a collector you will want this but otherwise it is nothing new. The record is a simple sleeve with a small thick paper insert with all the details about the tracks and who played on them. I think this is limited to 500 copies.