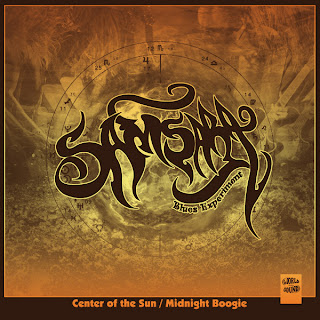 Samsara Blues Experiment released this 12” of new material just before their winter tour in 2012. The A side is a new fresh version of their song, Center of the Sun. This is probably better than the version on their debut LP. I love the delay guitar section as it is so psychedelic and they kick in with the heavy stoner riff just at the end again. Great stuff. Flip the B side over and you have a track called Midnight Boogie. It is a mixture of the old UFO song, called Boogie (1970) and their own track they jam out of it. Boogie is a killer guitar riff and for years I had waited for a band to do a cover of this one. I picked up the UFO live record back in 1979, even before I heard Strangers in the Night and was hooked on the early UFO sound. Anyway, I have to say that SBE do a pretty cool version. They play it a bit faster but it just does not hook you the way the UFO version does but once they leave the Boogie and enter into the Midnight part you have one of the most amazing tracks the band has ever recorded and wow, this blew me away. Killer vocal, psychedelic guitar and what a solo and riff!!!!! They even have some spacey synthesizers at times. Amazing number. the majority of the track is their own making and fucking great.

http://www.samsarabluesexperiment.com/ http://worldinsound.de/
Posted by Scott aka. Dr. Space at 7:28 AM