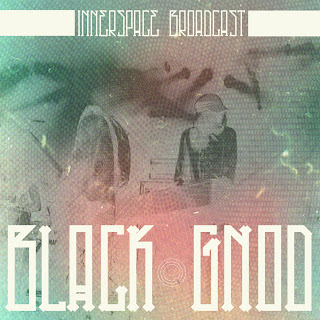 This is a jam that took place in 2011 with the Portuguese band, Black Bombain and the mighty GNOD. It is a slow developing jam that starts with a simple guitar line and a spoken word piece and space sounds. It really starts to take off when the cool bass line kicks in. About 8mins in he starts to play some lead guitar but the sound is pretty much a crazy mix of sound. You can only really hear the drums and voice clearly and everything else is just sort of a crazy blur of sound with no one really coming to the front much. Very psychedelic stuff, as your mind floats away from your body..  At 14mins a more heavy guitar riff kicks in he adds some long delays to the vocals that are really cool and far out.. around 17mins they come down to earth as things slow down and you can hear the synths (sounds like a kaossilator pad?) and the band try to find direction again. By 25mins the bands are just going nuts and the sound is really fucked up as everyone is the same volume so none of the instruments really stand out so you feel like you can sort of hear everyone but just barely. He is playing a ripping solo and you can only hear it if you really listen hard. It will still blow your mind. Around 30mins the drummer stops and they don’t all totally stop but nearly. The vocals take the center stage now as the others make some delay guitar, space sounds, etc.. the bass player is starting up another line that the drummer will hook into at 32½mins and they take off once again.. Towards the 45min mark it has a darker theme emerging with the guitar line and a very droned out synth-organ. The vocals reappear in a intense way. Spaced out stuff, I just wish the lead guitar was no so buried and there was a bit more clarity in the sound. It is just an audience recording and a lot of people playing so it is not that easy for the sound guy. Enjoy.. Not sure how many of these are made but they are really nicely packaged with some photos from the evening and in a nice sleeve.

http://ingnodwetrust.tumblr.com/
Posted by Scott aka. Dr. Space at 7:21 AM