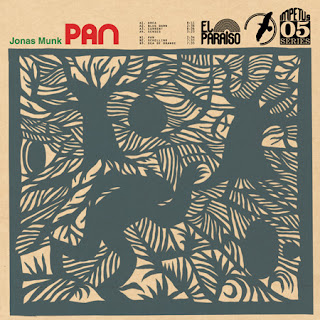 Jonas Munk is a multi-instrumentalist from Fyn, Denmark. He is most well known for his work with Causa Sui and Manual. He has also been involved in a large number of other electronic music collaborations as well. This is his new solo record from 2012 featuring 7 tracks ranging from 2 to 8½ mins in length. Orca starts with an analog synthesizer loop like old Tangerine Dream and slowly other instruments enter in but mostly other keyboards but also some guitar. A spacey one floats in and over and some different percussion sounds start to appear as it builds as well. Cool stuff. Blue Dawn is a short 2½ min piece where the keyboard has this cool spacey, flangy effect and you hear the sound of birds in the background. This leads into the 8½ min track called Current. It starts off with a bass and guitar line that has the feel of Colour Haze but not sound and then the guitar echoes away in a very cool way and some spacey stuff and then comes back again to repeat the cycle. Jens Aagaard plays tambourine on this track, otherwise all instruments on the record were recorded by Jonas. A very Colour Haze like guitar comes in as the analog synth bubbles float into the soundscape. The guitar section fades away as multiple layers of synths take over as they loop over and over and then an organ solo comes in. The guitar does not go away for good though. Very cool track. Senses is another short track, around 3½ mins long. Another all synthesizer track like old tangerine dream. Flip the record over now and you start with the short title track, Pan. IT features some beautiful guitar playing. Schelling starts with a like fast clock sound and then another analog drone sound joins the musical medley, as the lead synthesizer space takes the lead and this one has a pretty fast pace. The last track, Sea of Orange the main synth loop is quite slow, while he nicely layers the echoey spacey keyboard over the top. Very spaced out. A very nice record. This first press in on red vinyl in 500 copies.

http://elparaisorecords.com
http://www.discogs.com/artist/Jonas+Munk
Posted by Scott aka. Dr. Space at 7:25 AM