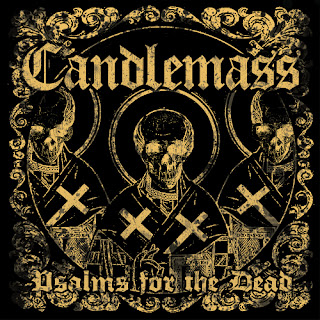 This is reported to be the last Candlemass record. It is funny when bands publicise things like this, especially when the members are still young (less than 55, ha!) and none of them are dead or drug casualties. Anyway, Leif, who is the leader of this band and writes all the material will put his creative energies in other places after this record and continue to make solo records, more Krux records, etc.. but let’s focus on this last Candlemass record. Just after the release it was announced that the band had parted ways with American singer, Robert Lowe. They all have spoken openly about the parting and how happy they were with his vocal efforts on the record. The only real new thing about this Candlemass record is the broad use of the organ on many tracks to give it a slightly different feel compared to the last few records with Robert Lowe. The record starts off with Prophet. This is a mid paced track with a hard riff, the first taste of the organ and intense singing of Robert. It slows down at the end of the track and is much more doomy. The sound of Dying Demons has this eerie keyboard that goes along with the chorus that is quite special. It has a great guitar solo section. Side B starts with the track from the 12” single, Dancing in the Temple (of the mad queen Bee), which I would not have bought if I knew in advance that both tracks appear in the same versions on the regular album. That sucks. Anyway, this is a short 3min song but a pretty catchy and cool one. Waterwitch starts with a Black Sabbath Electric Funeral inspired riff that disappears to a bass line and voice, before it becomes a slow heavy track. Side C starts with the Lights of Thebe with a keyboard intro before the guitar riff kicks in this cool slow track. Psalms for the Dead is probably the most “radio” friendly like track on the record with it’s very melodic phrasing. The Killing of the Sun, the other track that is on the Dancing in the temple 12” closes this side. It is actually also less heavy more melodic track as well but has a ripping wah solo. Siren Song features Per Wiberg on Hammond and this also includes a short solo. Very cool track. The normal LP ends with the song, Black as Time. IT starts as a spoken word piece with a clock ticking in the background. It is spoken by Mark Roberton, then the track kicks in with a monster riff and Robert takes over. The extra 7” has the two tracks Sadness runs Deep and Beneath the Fire. Sadness is a mid paced song with a real Candlemass riff and that Hammond adding to the track but it is used the same on nearly all the tracks, except for Siren Song. (We live) Beneath the Fire is more ominous sounding and Robert gives a great vocal performance on this one. If you were lucky or fast you were able to get the deluxe 180 gm black-gold vinyl edition with a poster and an extra 7” with two unreleased tracks. This version is an amazing package with a great booklet in the gatefold record with full color pictures of each member of the band and all the lyrics in the hard left part of the sleeve. It is made in only 300 copies.