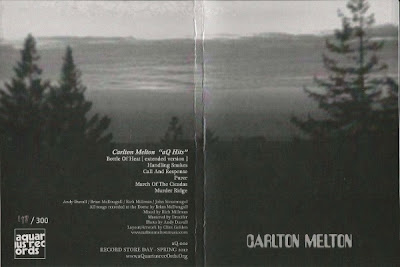 This is a limited edition CD made in 300 copies in a thin DVD style case that was released on the San Francisco based label, Aquarius on the record store day April 2012. Some of this is the heaviest stuff the band has made so far. It features 6 tracks in a little over 60mins. It starts with the long spaced out extended version (19mins) of Bottle of Heat. It has a pretty steady paced slow spaced-stoned groove. Handling Snakes is a really intense psychedelic guitar work out with that same low fi sound they really like. This is one of the heavier CM tracks. Call and Response is 14½ mins that starts slow with a low noise drone that the heavy blues guitar riff slowly fades in from. The guitar soloing is quite cool, raw and nasty at times. Really cool improvised jamming! Purer is a slow floating piece of music with slow building guitar. March of the Cicades is a 11½ min track that builds off a synth drone to start. The drums come in and they have a lot of fun bouncing guitar lines around in space on this one. Murder Ridge seems like a piece they did not finish…. Anyway, this is a really cool release if you are a fan of the band. Well worth hunting down.