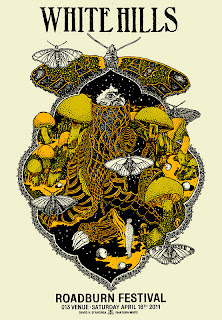 This is a very nice release on the Roadburn label from the amazing White Hills performance from 2011. It also features the special guest Shazzula on synthesizer for the entire concert. Unfortunately, you only get 42mins of the bands nearly 80min performance, perhaps this is so it can fit on a vinyl record in the future. Dave is totally ripping it up on the guitar, wow…. It reminds me of the vide that Gary Ramon could channel on the Sundial record, Return Journey! IT starts off hard and aggressive with Three Quarters from the Dead record. Quite a raw, almost harsh sound production on CD but I am sure it will sound better on vinyl. Shazzula’s sounds come spinning in here and there to add some extra space and flavour. After the spacey break in the song, Dave plays some totally ripping wah solos. Under Skin or by Name takes up nearly the next 10 mins and starts very slow and spacey with just bass and space sounds. The wah guitar is really mixed in your face on this track and the vocal quite far back but the long solo is very intense and also melodic. Great guitar playing. One of the tracks they seem to always play, Radiate is next and is sung by Ego. Intense bass playing on this one comes through a bit more strongly in the mix since Dave is playing more psyched out stuff on the guitar at times. The Condition of Nothing takes up most of the next 14 mins with really long spacey guitar workout and the most spaced out track on the CD. The CD ends with the title track of their lastest studio album H-p1. Great album, what more can I say..

http://www.burningworldrecords.com  http://whitehillsmusic.blogspot.com/
Posted by Scott aka. Dr. Space at 7:17 AM