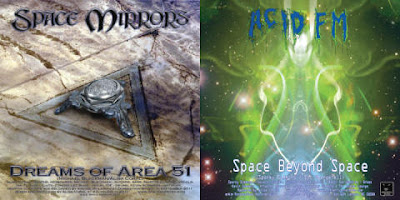 ACID FM is Sparky Simmon’s group (he runs Monsterfuzz records and released the great Monster Magnet tribute CD). They start the A side off with a melodic space rock track called Space beyond Space that reminds me a lot of mid 80’s Huw Lloyd Langton solo material. The track is uptempo with some nice lead guitar work and spacey vocals. Space Mirrors present a more psychedelic track called Dreams of Area 51, that features Nik Turner on saxophone and Violin Cyndee on electric violin. It starts with some spacey synths, which are prominent throughout the track, as the vocals by Martyr Lucifer begin. It is mostly spoken word type vocals. Nice layering of the sound. Michael Blackman (plays all the bass and guitar) does a nice solo as well. The track actually reminds me the vibe of tracks on the Space Ritual CD, Otherworld. Cool limited edition 7” on red vinyl in 300 copies. http://www.spacemirrors.com
http://www.monsterfuzzrecords.com http://www.acidfm.com