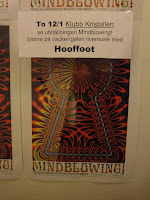 Magnus and I took the train over to Malmö to see our friends in Hoofoot, who half of half also played with Magnus and I in the Øresund Space Collective. I was totally blown away by this cool gallery and the excellent display called Mindblowing which was a beautiful display of all those cool 1960’s concert posters. Most of these I had never seen before, which was great. The place was also decked out with these like curtains with projectors showing movies and images. Really cool stuff. A Copenhagen band with organ, guitar and vocals made some music while an older guy named Percy Andersson did a slide show about how in the early 70s they just sold everything bought some caravans and the idea was just to head north in Sweden and see what happens! It was pretty cool but way too long and I could not understand it all. Distortion Girls, then played a set of their own and then finally Hoofoot. The DG first set was not that interesting, a bit too repetitive and not very interesting guitar at all. They are a bit strange as the female guitar player looked a bit androgynous and the organ player, I think is a transvestite? The only really normal looking one was the female vocalist who was in her own dream world. It was very dark in this place...

Hoofoot are a six piece all instrumental psychedelic jazz band! I had never seen them before. Jocke on guitar, Olä on synths, Pär on bass (all have played with ØSC) and then drums, fender Rhodes and a sax player. They played two songs in the first set of about 35mins, with the second one being better. Great players in this band. I was waiting for Jocke to do a guitar solo as everyone else did solos but he never did.. Quite a lot of people here and a great vibe.

Girls set up again and played a much cooler and interesting set with some more psychedelic guitar and organ playing as well. People did not seem to be that engaged with their performance though. Hoofoot set up again and wow, the first track was really cool. You can see the video. I only saw half of the next and last track as I had to run off for the train, which turned out to be late and I could have seen the whole thing, damn.. Great night in Malmö….. but too damn expensive to take the train over. It is now 164kr! Like $25 for the round triip ticket that takes only 20mins each way. Crazy..

Here is a link to keep track of these cool clubs put on in Malmö. http://www.klubbkristallen.blogspot.com/