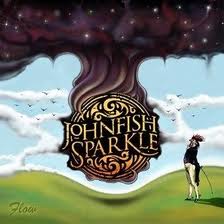 Johnfish Sparkle is a three piece Italian band. This is their 2nd release on the Swedish Transubstans label. 10 tracks in 53mins and it rocks! The songs all have a lot of lyrics so they spend a lot of the songs singing and not so much on the instrumental parts and jamming or guitar solos. Hard Times Goin’ On starts things off with a solid hard rock riffing song. Al plays the guitar and has a pretty distinctive vocal and it is mixed nicely into the music and not too loud. Benzai-Ten is next is a bit more bluesy. Downhill Blues is the longest track at 8½ mins long and starts with a cool fade in guitar as the track slowly builds up but turns into one of the best tracks where the band really stretches out. Spiral Confusion has a pretty cool riff and he uses a spacey effect on his voice in parts as well. The Circle has a flangy guitar and is a great song. The Traveller starts off with a wah guitar solo and then into the vocal section. I like the beginning and the end best on this song. Gaudi’s Run is next and this is a short 2 min instrumental acoustic guitar track. Not Alone is a solid hard rock song with a really nice guitar break. A Phoenix Flight is one of the bands more complex numbers with some great playing. The album closes with Crazy Lady another more blues one. If you are fans of 70s hard rock and some of the Swedish band like Magnolia, Lotus, etc.. you will probably dig this one. Solid.

http://www.transubstans.com  http://www.myspace.com/johnfishsparkle
Posted by Scott aka. Dr. Space at 6:49 AM