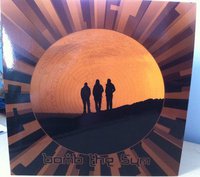 This is a sort of an archive release as Bomb the Sun (UK three piece band) broke up a few years ago but Kai from Kozmik decided the bands material just must be heard! The record was recorded in 2005. The record is mostly instrumental but there are some vocals on a three of the tracks. The band really has a great groove and vibe and there are some guitars solos as well. The opening track is called First Israeli in Space slowly fades in with a heavy Colour Haze like vibe to it and leads directly into Not Waving, Not Drowning which picks up the tempo and has a powerful riff but very melodic side when he sings. This is a very cool song with very interesting twists and turns in the instrumental parts. Great stuff. Your blood is on my Hands starts slow and spacey but really builds up and takes off. I like the E-bow like guitar in this opening section and the bass playing is superb. Another very powerful and interesting long song. Side B starts off with the last of the vocal tracks, . It has a very intense beginning before the laid back and slightly spacey vocal kind of floats over the intense rhythm. The end is is very Colour Haze inspired with the way the guitar riffing and sound as well. The last two tracks are instrumental. Deh Na has a bit of tension building and you wonder where the track will head off to? They mix in a long guitar solo and proceeded by a section with some organ, which was a surprise. The Last Israeli in Space is a short space out to end this excellent record. Fans of Monkey 3, My Sleeping Karma, Colour Haze, Glowsun, etc.. should dig this record. Kozmik Artifactz is a very cool mail order place and great to see them releasing great bands like this as well as Wight, Fuzz Manta and 1000Mods.

http://www.kozmik-artifactz.com
Posted by Scott aka. Dr. Space at 9:13 AM