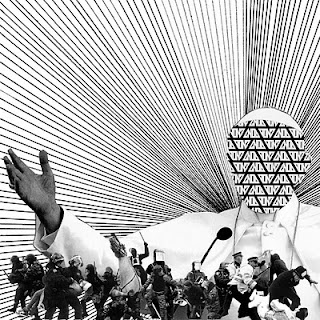 The drone psych rockers are back with a new full length record. The Middlesex split LP was released earlier this year and I reviewed that already but this is something quite different. The A side is one long track called Tony’s First Communion and what ever priest he saw, sure gave him a load of LSD or strong mushrooms or ayawaska! I have never heard a Gnod record with such a clean, clear production either. Anyway, the track has a very straight drum and bass line that hardly changes for a very long time as the Dark Energy synth starts things off but then slowly a lot more sounds and voices float into the landscape as the track slowly builds up. A lot of spaced out sounds get quite loud as some guitar now starts to enter into the sound in a subtle way and the pace is increased slightly and then it ends. A cool trip. Vatican starts with some distorted drums and then a spaced out sample in Italian over a sort of organ like sound. This track has darker feel to it as the spaced out voice slowly fades to the background and the distorted bass and drum gives this one a freaky sound as the synth sounds fly around the soundscape. The theme that started the track comes back to end it again. Yet, another Gnodly mindfuck that sadly only lasting 33mins. This released on 500 copies on white vinyl and as a download option, no CD will be pressed as far as I know (at least right now).
http://www.myspace.com/gnodgnod http://ingnodwetrust.tumblr.com/  http://www.rocketrecordings.com
Posted by Scott aka. Dr. Space at 9:21 AM